Flatirons Locksmiths: Getting Locked Out Can Happen To You! 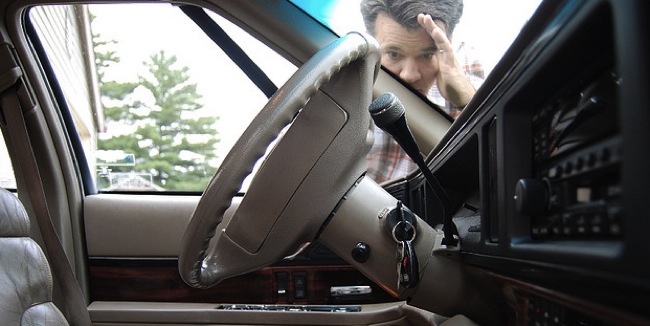 If you snicker when you hear stories about people locking themselves out of their cars or homes — you may want to reconsider because it could happen to you very easily. We’ve seen all kinds of lock-out situations in which the person on the outside wasn’t really at fault. The following stories are absolutely true:

1. Husband and Wife buy a house with a rim latch deadbolt on the back door. It has a quirk they know about but forget: it locks upon closing. On a Friday night, Husband is about to leave for a hockey game. He stops in the bedroom to tell Wife goodnight because it’s already almost ten o’clock and she’s bushed. Just after he pulls out of the garage, she remembers the shoes she left on the back porch. She goes out in a long nightshirt to get them. Door closes behind her. Husband is gone. Her keys and phone are on the bedside table.

They’re new in the neighborhood and Wife doesn’t know any of the neighbors. Rather than go to a strange door in her nightshirt, she lies down on a chaise to wait almost five hours for Husband to get home. The next day, they call Locksmith to change out the lock.

2. Church Music Director gives Teenager his key to unlock church auditorium for Saturday afternoon rehearsal. Teenager, being a teenager, tries to turn key the wrong way to unlock the door and breaks off the key in the lock. Music Director and choir arrive to find sheepish Teenager with half a key, which was Choir Director’s only one. No other church staff members are within a 50-mile radius of the church on a Saturday afternoon, so Locksmith is called and the rehearsal starts only an hour late.

It happens to everybody at one time or another. So the next time it happens to you and you’re anywhere around Boulder or Broomfield Counties in Colorado, contact Flatirons Locksmiths. With mobile techs all over both counties, we can get to you fast. And we won’t snicker.