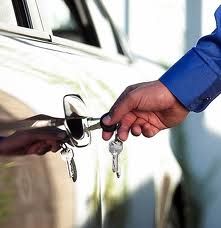 We received this note from a customer about the benefits of using a locksmith:

“I recently went to a large store which specializes in selling things at low prices in hopes of having a new key for my car made. When I finally navigated the unhelpful signs of this unnamed store to the place where they cut keys, I explained my request to the blue-aproned clerk who was manning the area (he was also manning the automotive and tool sections, by himself). I had read online that it’s important to tell the person making your key the make, model, and year of your vehicle, so that he or she can use the correct blank key, and I did exactly that. That conversation went something like this:

That probably should have been my first clue that something was wrong with this situation, and I probably would have walked away then, except that the clerk quickly followed up with “that will be 88 cents per key.” 88 cents? That sounded like a pretty great deal to me, and besides the store has a pretty lenient return policy, so what did I have to lose?

I paid for the key, had it cut to match my existing key, and immediately went to the parking lot to try it out. It didn’t work. Wouldn’t unlock my door OR start my engine. After making this discovery, I went back inside and explained the problem, asking for a refund. That didn’t happen the way I planned either. It turns out that what I bought from the store was a blank key, and once it had been cut, it was no longer returnable. I walked out of that store a very dissatisfied customer.

The next day, I called a Locksmith. He came to me instead of making me come to him, made me two new keys, and they worked perfectly. Whether you’re located in Broomfield, Boulder, or beyond, I highly recommend you do the same: It’s more than worth it. Even though I paid quite a bit more it was worth eliminating the hassle and I had 2 working keys.”

If this kind of service is what you’re looking for don’t hesitate to contact us: